A year ago at the beginning of 2018, January 11th to be precise, Facebook’s founder, Mark Zuckerberg, announced that Facebook would be changing its News Feed algorithm to prioritise content from ‘friends, family and groups’. Zuckerberg stated “As we roll this out, you’ll see less public content like posts from businesses, brands, and media. And the public content you see more will be held to the same standard—it should encourage meaningful interactions between people.” He went on to say that Facebook had “a responsibility to make sure our services aren’t just fun to use, but also good for people’s well-being” as reason for the change then he went on to admit that businesses will now have to work harder than before to gain their customers’ attention on the platform.

Many brands have been struggling since the announcement to come up with a way to combat the changes to the news feed algorithm. It’s been apparent for a while that organic reach has been declining but Facebook had never publicly admitted that until a lot later in the year. If you’re already using Facebook as a marketing tool for your brand then you will most likely have noticed a drop in your engagement over the past 12 months. This post is going to talk you through 3 key tools for Facebook in 2019 to help increase your presence and combat the algorithm changes to ensure your business stays visible on Facebook this year.

For those of you who create video content and share it on Facebook, there are important things to note about the effects that the changes to the algorithm have brought with them. It has been said that the all-powerful Facebook video is no longer ‘king’. Whilst it may still be an important part of the news need, numbers have dropped off sharply as the algorithm has shaped the new Facebook ‘ecosystem’.

Facebook employees have publicly announced that the reason the news feed favours video content less now is that ‘there’s less conversation on videos, particularly public videos’. The key to overcoming this is to understand the new power of conversation. If video content is being shown less often in the Facebook News Feed because of fewer comments and less conversation, your brand can work on finding new ways to encourage viewers to engage with comments over likes (plus, shares will always be great by their very nature).

Some suggestions on how to do this include; putting questions in your video content that you ask people to answer in the comments, running competitions in your videos which require people to enter by commenting, asking your video viewers to tag a friend who they think could benefit from seeing the video.

If you’re able to get people commenting on your videos, this could mean the new algorithm begins to favour your videos similarly to the old algorithm which will be hugely beneficial in helping you reach your target audience. 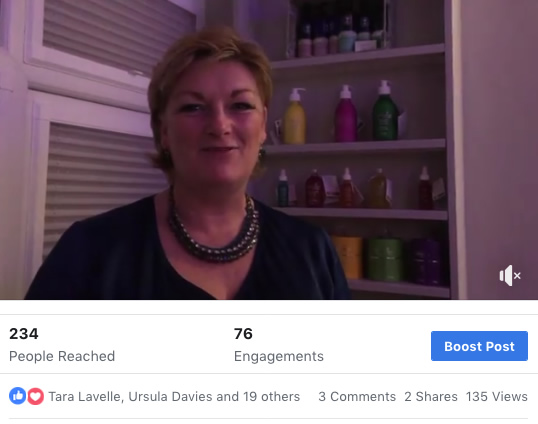 If you’re able to create Live videos on your feed which produce real value and generate conversation then you’ll be able to start to beat the algorithm changes and ensure your brand isn’t taking a hit to its online engagement.

Are there events that you attend or put on that could be broadcasted live on Facebook from your brand’s page? Could you do a Q&A or a live interview? Start to think about what type of content could spark engagement from your target audience if it were to be filmed live.

Meg and Rachael often do live videos on the Shake It Up Creative Facebook page, broadcast from the conferences they attend, workshops they deliver or clients they are with, and also simply to share knowledge and give design and marketing advice.

There has been a reported drop in Facebook page reach, with some sources citing organic reach as low as 2% since the changes to the algorithm.

While this doesn’t mean you should totally give up on your brand’s Facebook page, it does explain why many marketers are migrating toward Facebook Groups instead. As fans and followers essentially “opt-in” to a group and commit to discussions within it, the people who join your group are arguably the most likely to engage with your brand’s content.

For marketers focused on problem-solving and educating communities, groups are going to be better suited to your strengths rather than starting from scratch. Give away as much free content as you can, as long as it’s valuable and relevant for your target audience. Make people feel included and that they’re getting support and advice from industry experts. The return on investment from providing your target audience with content which benefits them in some way could be enormous.

We recently started a closed group called #ShakeItHUBOnline and would love for you to join in the conversation there, continue learning about the changes to the Facebook algorithm and how to combat it as well as other digital marketing and design related issues, too. It’s one of our 3 key tools for Facebook in 2019 put into practice!  Watch how our group members interact and see how we are able to help our target audience in an effective and meaningful way.

Do you run a group on Facebook already or are you part of one which you have found to be really helpful? Let us know in the comments below.

If you need help getting started, why not book a social media marketing consultation with us?

Meg Fenn, Director of Shake It Up Creative

Join our newsletter and get our blogs direct to your inbox, plus all the latest news. We also share what's going on locally and nationally. SIGN UP HERE

Get in touch, connect with us, visit us by the seaside in West Sussex. We would love to work with you.

Get our latest blog posts, upcoming workshops,
news and announcements sent directly to your inbox.
Sign up
Scroll back to top
This site uses cookies: Find out more.